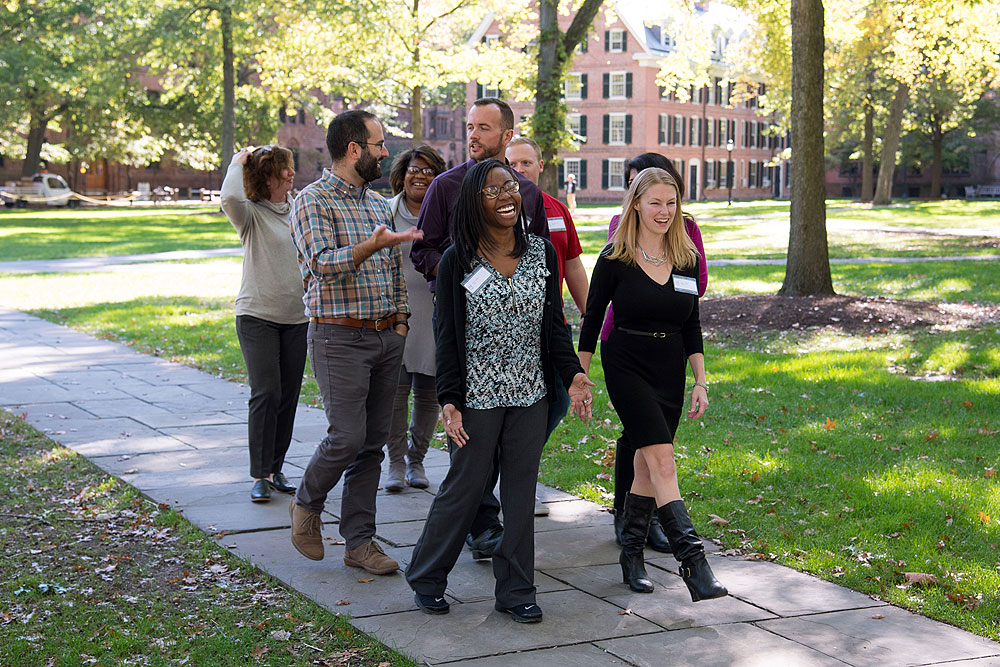 National Fellows on the Yale University campus at the Annual Conference, October 2017.

Fifty-four public school teachers from seventeen school districts in nine states and the District of Columbia have been chosen to participate in national seminars and an Intensive Session as part of the Yale National Initiative to strengthen teaching in public schools®.

Thirty-eight of the teachers, named Yale National Fellows, are from school districts that are planning or exploring the establishment of a new Teachers Institute for the Bay Area, CA; Chicago, IL; the Diné Nation, AZ and NM; the District of Columbia; Pittsburgh, PA; Richmond, VA; and San José, CA. Other National Fellows come from existing Teachers Institutes located in New Castle County, DE; New Haven, CT; Philadelphia, PA; and Tulsa, OK. Overall, half of the National Fellows are participating in national seminars for the first time.

The purposes of the seminars are to provide public school teachers deeper knowledge of the subjects they teach and first-hand experience with the Teachers Institute approach to high-quality professional development. This fosters their leadership in an existing Teachers Institute or prepares them to lead the development of a new Teachers Institute. Each teacher writes a curriculum unit to teach his or her students about the seminar subject and to share with other teachers in their school district and, through the Web site at teachers.yale.edu, with teachers anywhere. The curriculum units implement academic standards of the teachers’ school districts and assist the teachers in engaging and educating the students in their school courses.

The 2018 seminars, which begin on May 4 and conclude in mid-August, are:

Participants in the two-week Intensive Session in July, who live on the Yale campus, will include not only the Yale National Fellows but also university faculty members who have led or may lead local Teachers Institute seminars at partner universities around the country. Between July 9 and 20, Fellows will attend daily seminar meetings and will confer individually with their seminar leader. Superintendents and other local school officials will accompany the National Fellows when they return to Yale for the Annual Conference on October 26-27.

National Fellows will serve as the Coordinator for each seminar. The Coordinators are: Carol P. Boynton of New Haven, Connecticut; Cristobal Carambo of Philadelphia, Pennsylvania; Zachary Meyers of the District of Columbia; Jolene R. Smith of the Diné Nation; Jennifer Vermillion of San José, California; and Krista B. Waldron of Tulsa, Oklahoma.

The Yale National Initiative to strengthen teaching in public schools, now in its fourteenth year, is a long-term endeavor to influence public policy on teacher professional development, in part by establishing exemplary Teachers Institutes for high-poverty, high-minority schools in states around the country. These Institutes follow the approach developed originally in New Haven and implemented now in other cities.

Teachers Institutes are educational partnerships between universities and school districts designed to strengthen teaching and learning in a community’s high-need public schools. Evaluations have shown that the Institute approach exemplifies the characteristics of high-quality teacher professional development, enhances teacher quality in the ways known to improve student achievement, and encourages participants to remain in teaching in their schools.